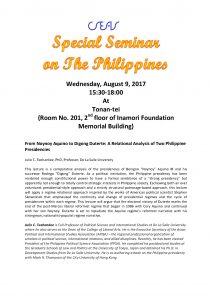 Speaker 2: Dr. Lisandro E. Claudio, Associate Professor at the Department of History, De La Salle University
Title: Is There a Liberalism from the Global South?

A “negative case” (Barth 2000) of labor migration in the post‐war period , Japan is a non‐traditional migrant receiving country which is currently exhibiting a faltering economy accompanied by demographic changes. Interestingly, the interplay of labor economics, demographic forces and immigration politics has led the restrictive government to gradually open its borders to foreign migrants.
As the largest newcomer migrant group in Japan, the character of the Filipino community has been contingent on these social and political transformations. Indeed, the composition of the Filipino community has been altered and restructured in the past decades: from irregular migrants and shortterm workers including entertainers, to groups with long‐term migration prospects including Filipino nikkeijin, Filipinos married to Japanese and skilled laborers (e.g. nurses under the JPEPA scheme).

As Japan faces the realities of aging and shrinking population, its migration policies have gone through several phases of reform. And yet, most of these changes were often reactive with insubstantial shortterm results. By focusing on the Filipino migrant community in Japan, this paper explores how Japan attempted to govern and manage its migrant population in the past phases of policy revisions. The paper also examines the Philippine‐Japan migration dynamics, giving emphasis on the case of the Filipino nikkeijin who have been manning various Japanese factories together with their Brazilian counterparts.

Ron Bridget Vilog is Associate Professor and the current Chair of the International Studies Department of De La Salle University. He obtained his PhD in International Development from the Graduate School of International Development (GSID) of Nagoya University, Japan through the Monbukagakusho Scholarship Program. He also holds an MA in Japanese Studies from the Japanese Studies Program of Ateneo de Manila University. Dr. Vilog has written research papers on the migration dynamics of Filipino
workers in Japan.

In recent years, there has been a profusion of “theory from the Global South” that draws knowledge from the margins of intellectual worlds. While these works, along with postcolonial theory, have challenged the parochialism of “Euro‐America” and have, to some extent, “provincialized” the West, they have been cavalier in their treatment of “Western Enlightenment.” In particular, they have assumed a mutual unintelligibility between colonial/postcolonial traditions and concepts of European provenance such as modern liberalism.

Using the Philippine liberal tradition—a tradition that took root in the 19th century and became the dominant sensibility of political discourse in the 20th—this paper asks whether or not liberalism can be refashioned in and for colonial contexts. I will first discuss the history of Philippine liberalism, and compare it with the development of other Southeast Asian liberalisms. I will then make an argument for the urgency of a postcolonial liberalism in an age of authoritarian nostalgia and extreme populism.