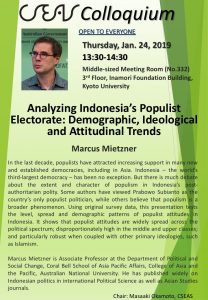 You are cordially invited to a CSEAS Colloquium on

Abstract
In the last decade, populists have attracted increasing support in many
new and established democracies, including in Asia. Indonesia – the
world’s third-largest democracy – has been no exception. But there is
much debate about the extent and character of populism in Indonesia’s
post-authoritarian polity. Some authors have viewed Prabowo Subianto as
the country’s only populist politician, while others believe that
populism is a broader phenomenon. Using original survey data, this
presentation tests the level, spread and demographic patterns of
populist attitudes in Indonesia. It shows that populist attitudes are
widely spread across the political spectrum; disproportionately high in
the middle and upper classes; and particularly robust when coupled with
other primary ideologies, such as Islamism.

Marcus Mietzner is Associate Professor at the Department of Political
and Social Change, Coral Bell School of Asia Pacific Affairs, College of
Asia and the Pacific, Australian National University. He has published
widely on Indonesian politics in international Political Science as well
as Asian Studies journals.