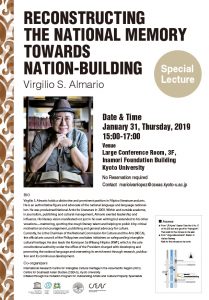 Reconstructing the National Memory Towards Nation-Building

Like all civilized countries in the world, the Philippines regards the protection and preservation of cultural heritage as a national responsibility. It was mandated as a mission of the National Commission for Culture and the Arts (NCCA) when it was established in 1992. However, government efforts have mainly focused on tangible cultural heritage, in particular, our Spanish colonial period churches and structures. The preservation of intangible cultural heritage (ICH) remains an undertaking of individual scholars and a few research centers in the academe.

This situation calls for a redirection of efforts and resources. The NCCA recently initiated activities towards the development of a nationwide and systematic research program for intangible cultural heritage. First, it has strengthened its own ICH Committee to gather all available information on aspects of traditional literatures. At the same time, it has engaged a number of scholars and academicians to participate in a series of fora and roundtable discussions with the end goal of organizing a medium term research agenda on ICH.

This research agenda will serve as guide in identifying gaps and areas which need more research, encourage the generation of more scholarly proposals, and support the more productive allocation of resources by expanding financing to more research areas while preventing the duplication of projects. It will include activities to create greater national awareness on the value of ICH, inspire the creation of contemporary works based on ICH, and ultimately use the rich and diverse national memory in the preserved ICH as an instrument for nation-building.

BIO:
Virgilio S. Almario holds a distinctive and prominent position in Filipino literature and arts. He is an authoritative figure and advocate of the national language and language nationalism. He was proclaimed National Artist for Literature in 2003. Within and outside academe, in journalism, publishing and cultural management, Almario exerted leadership and influence. His literary vision manifested not just in his own writing but extended to his other vocations – mentoring, spotting the rough literary talent and helping to polish it by critical motivation and encouragement, publishing and general advocacy for culture. Currently, he is the Chairman of the National Commission for Culture and the Arts (NCCA), the official arts council of the Philippines and takes initiatives on safeguarding intangible cultural heritage. He also leads the Komisyon Sa Wikang Filipino (KWF), which is the sole constitutional authority under the office of the President charged with developing and promoting the national language and overseeing its enrichment through research, publication and its continuous development.