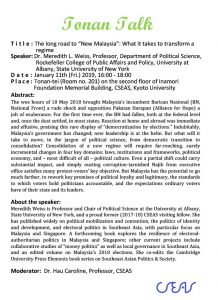 Title: The long road to “New Malaysia”: What it takes to transform a regime

Abstract:
The wee hours of 10 May 2018 brought Malaysia’s incumbent Barisan Nasional (BN, National Front) a rude shock and opposition Pakatan Harapan (Alliance for Hope) a jolt of exuberance. For the first time ever, the BN had fallen, both at the federal level and, once the dust settled, in most states. Reaction at home and abroad was immediate and effusive, praising this rare display of “democratization by elections.”
Indubitably, Malaysia’s government has changed; new leadership is at the helm. But what will it take to move, in the jargon of political science, from democratic transition to consolidation? Consolidation of a new regime will require far-reaching, surely incremental changes in four key domains: laws, institutions and frameworks, political economy, and – most difficult of all – political culture. Even a partial shift could carry substantial impact, and simply ousting corruption-tarnished Najib from executive office satisfies many protest-voters’ key objective. But Malaysia has the potential to go much farther, to rework key premises of political loyalty and legitimacy, the standards to which voters hold politicians accountable, and the expectations ordinary voters have of their state and its leaders.

About the speaker:
Meredith Weiss is Professor and Chair of Political Science at the University at Albany, State University of New York, and a proud former (2017-18) CSEAS visiting fellow. She has published widely on political mobilization and contention, the politics of identity and development, and electoral politics in Southeast Asia, with particular focus on Malaysia and Singapore. A forthcoming book explores the resilience of electoral-authoritarian politics in Malaysia and Singapore; other current projects include collaborative studies of “money politics” as well as local governance in Southeast Asia, and an edited volume on Malaysia’s 2018 elections. She co-edits the Cambridge University Press Elements book series on Southeast Asian Politics & Society.