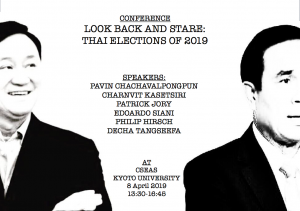 Conference on “Look Back and Stare: The Thai Elections of 2019”

Abstract:
Thailand will hold its first elections since the military seized power from the elected government of Yingluck Shinawatra in 2014. The elections will take place on 24 March 2019. Despite the return of power to civilian rule through the electoral process, nothing guarantees the full return of democracy. Previously the military appointed its allies to draft the constitution as a vehicle designed to obstruct the pace of democratisation. The military has been criticised in its attempt to maintain a position of power for the traditional elites. Meanwhile, other political forces working in the wings, such as the Thaksin Shinawatra faction, have continued to shape the Thai political landscape. The emergence into the political spotlight of Princess Ubolratana and the dramas that followed must be examined. The rise of new political faces, including the leader of the Future Forward Party, Thanathorn Jungrungruangkit, will also be assessed. The key question is whether the elections will diminish the decade-long political crisis. This conference brings together experts on Thailand from various fields to offer candid analytical views in regards to the March elections.