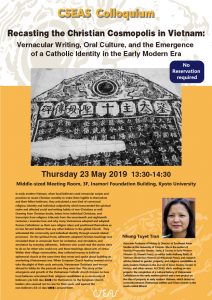 Abstract:
In early modern Vietnam, when local believers used vernacular scripts and practices to recast Christian morality to make them legible to themselves and their fellow-believers, they articulated a new kind of communal religious identity and individual subjectivity which transcended the spiritual realm and affected social and writing habits of non-Christians as well. Drawing from Christian books, letters from individual Christians, and transcripts from religious tribunals from the seventeenth and eighteenth centuries, I examine how and why many Vietnamese adopted and adapted Roman Catholicism as their own religion (đạo) and positioned themselves as no less fervent believer than any other believer in the global Church. They articulated this community and individual identity through several related processes: On the spiritual front, adherents adapted Christian teachings and circulated them in vernacular form for recitation, oral circulation, and emulation by everyday adherents. Believers who could read the stories were
to do so for other who could not, and these teachings about acts of virtue.

Within their village communities, they collected money to build an ephemeral church at the same time they wrote and spoke about building an everlasting (Vietnamese) one. When European Church leaders seemed not to take the plight of their souls seriously, Vietnamese Christians sent envoys abroad to lobby for the pastoral care they were due. This story of the emergence and growth of the Vietnamese Catholic church focuses on how local believers articulated their religious sensibilities as a community of believers (các bổn đạo 各本道) for themselves, to the European Church leaders who seemed not to care for their souls, and against the non-believers (kẻ vô đạo 仉無道) around them.

About the Speaker:
Nhung Nuyet Tran is Associate Professor of History & Director of Southeast Asian Studies at the University of Toronto. She is the author of Familial Properties: Gender, State, & Society in Early Modern Vietnam (U. Hawaiʻi Press), co-editor (with Anthony Reid) of Vietnam: Borderless Histories (U.Wisconsin Press); and research articles related to gender, property, and religious sensibilities in early modern Vietnam in the Journal of Asian Studies, Gender & History, and other venues. At CSEAS, she is working on two projects: the completion of a cultural history of Vietnamese Catholicism in the early modern period and a new project on the idea of property in early modern Vietnam, which draws on contracts between Vietnamese settlers and Cham women in the south central littoral.