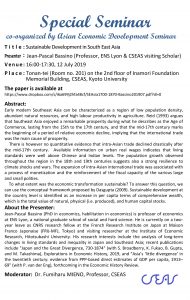 Abstract:
Early modern Southeast Asia can be characterized as a region of low
population density, abundant natural resources, and high labour
productivity in agriculture. Reid (1993) argues that Southeast Asia
enjoyed a remarkable prosperity during what he describes as the Age of
Commerce, lasting from the 15th to the 17th century, and that the
mid-17th century marks the beginning of a period of relative economic
decline, implying that the international trade was the main cause of
prosperity.
There is however no quantitative evidence that intra-Asian trade
declined drastically after the mid-17th century.Available information on
urban real wages indicates that living standards were well above Chinese
and Indian levels. The population growth observed throughout the region
in the 18th and 19th centuries suggests also a strong resilience to
climate shocks and wars. The expansion of intra-Asian international
trade was associated with a process of monetization and the
reinforcement of the fiscal capacity of the various large and small
polities.
To what extent was the economic transformation sustainable? To answer
this question, we can use the conceptual framework proposed by Dasgupta
(2009). Sustainable development at the country level is identified as an
increase in per capita terms of comprehensive wealth, which is the total
value of natural, physical (i.e. produced), and human capital stocks.

About the presenter:
Jean-Pascal Bassino (PhD in economics, habilitation in economics) is
professor of economics at ENS Lyon, a national graduate school of social
and hard science. He is currently on a two-year leave as CNRS research
fellow at the French Research Institute on Japan at Maison Franco
Japonaise (FRIJ-MFJ, Tokyo) and visiting researcher at the Institute of
Economic Research, Hitotsubashi University. His research interests
include the analysis of long-term changes in living standards and
inequality in Japan and Southeast Asia; recent publications include
“Japan and the Great Divergence, 730-1874” (with S. Broadberry, K.
Fukao, B. Gupta, and M. Takashima), Explorations in Economic History,
2019, and “Asia’s ‘little divergence’ in the twentieth century: evidence
from PPP-based direct estimates of GDP per capita, 1913–69” (with P. van
der Eng), forthcoming in the Economic History Review.