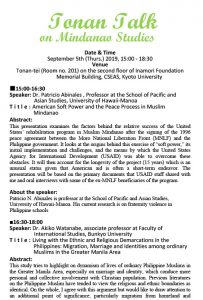 ■15:00-16:30
Speaker: Dr. Patricio Abinales , Professor at the School of Pacific and Asian Studies, University of Hawaii-Manoa
Title: American Soft Power and the Peace Process in Muslim Mindanao
Abstract:
This presentation examines the factors behind the relative success of
the United States’ rehabilitation program in Muslim Mindanao after the
signing of the 1996 peace agreement between the Moro National Liberation
Front (MNLF) and the Philippine government. It looks at the origins
behind this exercise of “soft power,” its initial implementation and
challenges, and the means by which the United States Agency for
International Development (USAID) was able to overcome these obstacles.
It will then account for the longevity of the project (15 years) which
is an unusual status given that American aid is often a short-term
endeavor. The presentation will be based on the primary documents that
USAID staff shared with me and oral interviews with some of the ex-MNLF
beneficiaries of the program.

About the speaker:
Patricio N. Abinales is professor at the School of Pacific and Asian
Studies, University of Hawaii-Manoa. His current research is on
fraternity violence in Philippine schools

■16:30-18:00
Speaker: Dr. Akiko Watanabe, associate professor at Faculty of
International Studies, Bunkyo University
Title: Living with the Ethnic and Religious Demarcations in the
Philippines: Migration, Marriage and Identities among ordinary Muslims
in the Greater Manila Area
Abstract:
This study tries to highlight on dynamism of lives of ordinary
Philippine Muslims in the Greater Manila Area, especially on marriage
and identity, which conduce more personal and collective involvement
with Christian population. Previous literatures on the Philippine Muslim
have tended to view the religious and ethnic boundaries as identical.
On the whole, I agree with this argument but would like to draw
attention to an additional point of significance, particularly
migration from homeland and marriages with people of different
religious-cultural backgrounds. It is crucial to acknowledge the roles
of economic migration and internal displacement of ethnic Muslims in
expanding the Islamic landscape, and intermarriage that might have
fostered relativizing the ethnic demarcation of the Philippine Muslims.

As a case study, the focus is drawn on a Muslim enclave in Manila, a
stepping stone for international migration as well as a destination of
job seekers and educational attainment today. Muslim Residents who have
lived there for many years have begun to despair of or despise the
separatist movements. Now that they are second or third generation, they
regard themselves as Manila Muslims. This phenomenon may be caused by
the fluctuation of ethnic demarcations. Some children of
inter-religious and inter-ethnic marriages have started to acknowledge
their identity as ‘mix’, ‘half’, or ‘mestizo’, blending together
different cultures, and viewing themselves as Muslims who are not
strictly bound by the customs of their hometowns. These terms are the
opposite of the prideful ‘pure.’ In Muslim communities in the southern
Philippines, where endogamy among the same ethnic group is particularly
preferred, members regarded themselves as being pure (of blood),
putting the others beneath.

Yet, as living in Manila, they are imposed to adopt flexible attire and
behaviour to get along with Christians in their work places and
schools. Some parents give Christian names to their new-born babies, so
that they won’t be discriminated against for employment or in doing
business. Others even disguise themselves by holding Christian
identification cards. If they live as Muslims, they will most likely
work in the Arab or neighbouring Muslim countries. Becoming successful
as a Philippine Muslim, in sum, is still a difficult proposition.

The expansion of life worlds of Muslim from the southern Philippines has
led to its diversity in Greater Manila, the central part of the
country. The seemingly homogenous Muslim populations and their
practices of Islam are being negotiated and contested in everyday
lives. These dynamism are given less attention where prospects on
Bangsamoro secessionist movements and internationally-linked terrorism
are of full concern among the global society. Rather, this study tried
to put light on the Muslim people who are constrained to get through in
the Philippine society, and form their own shape of identities and
survival practices concurred with the surrounding environments.

About the speaker:
Akiko Watanabe (Ph.D. in Area Studies) is an associate professo at
Faculty of International Studies, Bunkyo University, Japan. Based on
ethnographic researches in Manila and the Gulf, she have written several
articles on the migration of Muslim Philippines, religious
conversions, family strategies, politics of minorities in urban
settings, and rural empowerment in fair trade.