POSTPONED – Seminar by Paul Chambers on Thailand in 2020: A Weakened Prayuth and a Weakened Military, on 10 April 2020 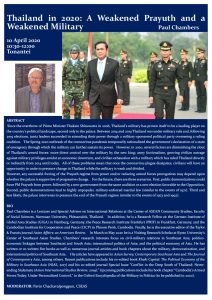 Thailand in 2020: A Weakened Prayuth and a Weakened Military
By Dr Paul Chambers

ABSTRACT:
Since the overthrow of Prime Minister Thaksin Shinawatra in 2006, Thailand’s military has proven itself to be a leading player on the country’s political landscape, second only to the palace. Between 2014 and 2019 Thailand was under military rule and, following 2019 elections, junta leaders succeeded in extending their power through a military-sponsored political party overseeing a ruling coalition. The Spring 2020 outbreak of the coronavirus pandemic temporarily rationalized the government’s declaration of a state of emergency through which the military can further sustain its power. However, in 2020, several factors are diminishing the clout of Thailand’s armed forces: more direct control over the military by the new king; army factionalism, growing civilian outrage against military privileges amidst an economic downturn, and civilian exhaustion with a military which has ruled Thailand directly or indirectly from 2014 until today. All of these problems mean that once the coronavirus plague dissipates, civilians will have an opportunity to unite to pressure change in Thailand while the military is weak and divided.

However, any successful forcing of the Prayuth regime from power and/or reducing armed forces prerogatives may depend upon whether the palace is supportive of progressive change. For the future, there are three scenarios. First, public demonstrations could force PM Prayuth from power, followed by a new government from the same coalition or a new election favorable to the Opposition. Second, public demonstrations lead to highly unpopular, military-enforced martial law (similar to the events of 1971). Third and less likely, the palace intervenes to pressure the end of the Prayuth regime (similar to the events of 1973 and 1992).

BIO:
Paul Chambers is a Lecturer and Special Advisor on International Relations at the Center of ASEAN Community Studies, Faculty of Social Sciences, Naresuan University, Phitsanulok, Thailand. In addition, he is a Research Fellow at: the German Institute of Global Area Studies (GIGA) in Hamburg, Germany; the Peace Research Institute Frankfurt (PRIF) in Frankfurt, Germany; and the Cambodian Institute for Cooperation and Peace (CICP) in Phnom Penh, Cambodia. Finally, he is the executive editor of the Taylor & Francis journal Asian Affairs: an American Review. In March to May 2020 he is a Visiting Research Scholar at Kyoto University’s Center of Southeast Asian Studies. Chambers’ research interests focus on civil-military relations in Southeast Asia; politico-economic linkages between Southeast and South Asia; international politics of Asia; and the political economy of Asia. He has written or co-written five books as well as numerous journal articles and book chapters about the military, democratization, and international politics of Southeast Asia. His articles have appeared in Asian Survey, Contemporary Southeast Asia and The Journal of Contemporary Asia, among others. Recent publications include his co-edited book Khaki Capital: The Political Economy of the Military in Southeast Asia (NIAS, 2017) and his co-edited journal Special Issue “Conflict in the Deep South of Thailand: Never-ending Stalemate (Asian International Studies Review, 2019).” Upcoming publications include his book chapter “Cambodia’s Armed Forces Today: Under Personalized Control,” in the Oxford Encyclopedia of the Military in Politics (to be published in 2020).